Chiquante's I'm All That - "Pedro" 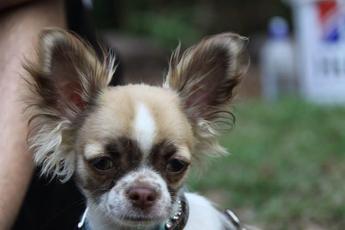 My ‘puppy hunting’ began a few months after the loss of a dear pet. Since this was the first time I would own a Chihuahua, I did extensive research and asked friends who had chihuahua’s about the breed. Once I decided this was the breed for me, I began emailing KUSA registered breeders around South Africa. Some never responded while others I wasn’t 100% sold on, there was just ‘something’ missing. Eventually I found “Chiquante Chihuahua’s”- Angelique responded immediately and stood out from all the rest. Her attitude wasn’t one of making a ‘quick buck’ but rather that this was a passion she put her heart and soul into. Just from her response I could see she was different from the rest.

It was the first time I had inquired about purchasing a puppy far from home. I was especially nervous of not meeting him before since I had heard horrific stories of people receiving puppies in poor condition, so naturally I was cautious and did my homework. I was not afraid to ask Angelique detailed questions and never once did she make me feel like I was inconveniencing her or that I was a bother. She understood my reservations and put my mind at ease. After numerous emails, both of us sussing the other out, she sent a picture of Pedro and I knew he was ‘the one’. I immediately emailed and asked for the details to purchase my little boy. I received her very detailed questionnaire, puppy purchase agreement and list of references. Some of the questions were challenging but I knew this was because she needed to make sure Pedro was going to the right home. She really loves and cares for her puppies and doesn’t allow them to go to just anyone. After she confirmed Pedro was going to be mine, I was ecstatic! We kept in contact on a regular basis and she forwarded pictures weekly. 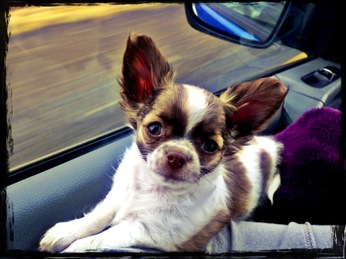 As my ‘adoption day’ grew closer I became more and more excited, counting down the days and hours until he arrived. I wasn’t sure what to expect, but the important thing was that I had faith in Angelique. I received an sms from her in the morning of Pedro’s arrival with his flight details on when he would arrive at King Shaka Airport, Durban. My boyfriend and I arrived at the airport, like newly adoptive parents, extremely excited and overjoyed. I was handed this little pet travel box, inside was a well-fed little puppy wagging his tail on his luxurious blankie and blue monkey teddy, which might I add was bigger than him! We immediately fell in love with him. No sooner had I collected Pedro, I received another sms from Angelique seeing if everything was okay and if “Pedro was everything I had hoped for?” to which I responded, “He is everything and more!” 48 hours after his arrival, as per the puppy purchase agreement, Pedro visited our Vet and received a clean bill of health, who commended Angelique on how healthy and well kept he was.

Pedro has a very dear place in our hearts. He is always happy, loves to give kissies, and gorgeous as ever! Angelique’s attention to detail can clearly be seem from the bigger choices like choosing only the best food and treats to using high quality shampoo and conditioner, right down to the smaller details like giving Pedro a luxurious blankie and squeaky toy for his travel; to scrap-booking a bee on the diet sheet and placing all his paper work neatly in a plastic file which was attached to his travel box. Her “after puppy purchase” has been wonderful; she regularly keeps in contact and inquires about his progress.

They say you reap what you sow and no truer are those words- she really is a breeder like no other, her care and love for her little puppies speaks for itself! I would highly recommend “Chiquante Chihuahua’s” to any future ‘puppy-parents’ who are looking for a breeder with a difference, which goes the extra mile and is passionate about her doggies!

Copyright Chiquante Chihuahuas © 2008-2018  | All photographs & Content Property of Chiquante. Please Do Not Copy